One might assume that the organizational structures of large, established tech companies such as Amazon, Google, Microsoft and Apple are complex, intricate and perhaps unique to each company.

However, if we take a high-level view, we can reveal common patterns and best practices that have been implemented among these tech giants.

Tech companies, in the context of this article, are organizations whose business models are centered around a key digital product, such as an app or online service.

If you were building a tech giant today, what would be the must-have org structure elements to incorporate based on the success of current big-tech companies?

Tech Companies can be Large!

When tech companies start out, they are usually run by a single founder, or two/several co-founders,  who then build teams around and beneath them in the hierarchy, as their company grows.

So these tech companies have a significant number of people working in their organizations. Some of them are as large as reasonably-sized cities or large towns.

Typically, these larger tech companies still have a founder or founders at the top. Sometimes, the founder(s) has been replaced by a CEO - as in Google and Microsoft. However, in some cases, the founder/CEO is still there, like Mark Zuckerberg at Facebook (now known as Meta).

Below the founder/CEO are various departments headed up by senior executives, in charge of Engineering, and then by Product, with a geographical organization added for tech companies with global reach.

Founder and Executive Chair (and former CEO) Jeff Bezos uses what looks (on the outside) like a traditional top-down hierarchical structure, with CFO, CEOs and senior VPs of major departments reporting to him. There is very little turnover among these senior staff members.

Decision-making is forced downwards into a structure organized by territorial areas (such as North American Consumer, Sales in China, eCommerce in Europe).

Example above is a representation of the Amazon leadership team. This information is for demonstration purposes only and has been sourced from public information. It may not accurately reflect roles, responsibilities, titles or personnel.

Amazon's famed ‘two-pizza rule’ determines the maximum size for any one team, being a team that can be fed by two pizzas, so about six to eight people.

Overall, Amazon’s organizational structure can best be described as ‘Global Function-Based Groups’. These teams work independently of each other, with each one working on their own projects without any input or knowledge from others.

Staying focussed on their own projects means the teams keep innovating until they have a product that will “positively impact their customers” (which is their mantra).

Since 1997, Apple has used a functional structure, with each department led by a domain expert. Steve Jobs argued that it was easier to “teach an expert to manage than to teach a manager to be an expert”.

“The best manager,” Jobs once said, “is someone who does not want to be a manager, but realises one day they will have to do it, as they are the best for the job.”

This 'expert-manager' is immersed in all the detail and has a fundamental understanding of the product (or engineering area) they are in charge of. They can answer all kinds of questions regarding their department, and as such do not need to go outside. They function well and can get on with the job of innovating.

Apple deploys hundreds of these specialist teams, and dozens of teams may have to interact with each other and collaborate in order just to produce a new product element or enhancement. They are skilled debaters and are expected to be able to collaborate with each other in a constructive manner.

Note how decisions are made by the experts most qualified to make them. If everyone in the organization does this, you can see how innovation is driven through the company, and some amazing new product features result.

As is well known, Apple started out with two co-founders, Steve Jobs and Steve Wozniak, with Jobs leading the marketing and strategy, with Wozniak as the engineer. In the mid 80s, Jobs was forced out, and the higher echelons of the company became more corporatized. By 1997, Apple was languishing, and Jobs returned, until his untimely death in 2011, whereupon his second in command, Tim Cook took over as CEO.

The Best Googlers Put Through Their Paces

With two co-founders Larry Page and Sergey Brin, the search giant brought in a CEO (Eric Schmidt) from 2001 to 2011, before Larry took over as CEO again. Eric became Executive Chair. In 2015, Sundar Pichai became CEO.

With the company’s core vision of “organizing the world’s information” every staff member (‘Googler’) is encouraged to innovate and solve problems every day. Even the layout of the ‘Googleplex’ office space is designed to stimulate thought and problem-solving.

Data is important to Google, so it’s no surprise that they use data to determine the best ways to recruit and organize their employees. They look for staff who can think in disruptive and different ways, and who want to learn continuously.

Every employee can work one day a week on whatever individual research project they want, which the company funds (the “20% Rule”).

Structure-wise, Google tends to use a manager who reports to a VP who then reports to the top. The manager supervises their team, which can be made up of 30% contractual employees. The high reliance on contract staff has led to some external criticism of Google, as these workers don’t have access to benefits and leave.

So, How are Large Tech Companies Organized?

Big tech companies mainly revolve around their digital products and services. As such, we tend to see engineering teams, plus various product departments added to the structure once the products are large enough, standalone profit centre items.

Tech companies operating in various regions and territories tend to have a geographic element also interwoven into their organization structure.

Whatever structure is used, the emphasis is very much on staying ahead of the competition, so innovation and agility are highly prized features of the recruitment, training and organization of staff. It’s about getting things moving, with the ends justifying the means.

The important ingredient here is how well these teams work, their productivity and output. The best engineers are not cheap and are highly sought after, so attracting, retaining and getting the most out of them is key.

Office culture and a clear, accepted mission are as important as how to arrange the staff. And how you arrange them may change over time, as the tech companies grow.

When the tech company is small, and still in the startup phase, the org chart may be very simple and flat, much like this: 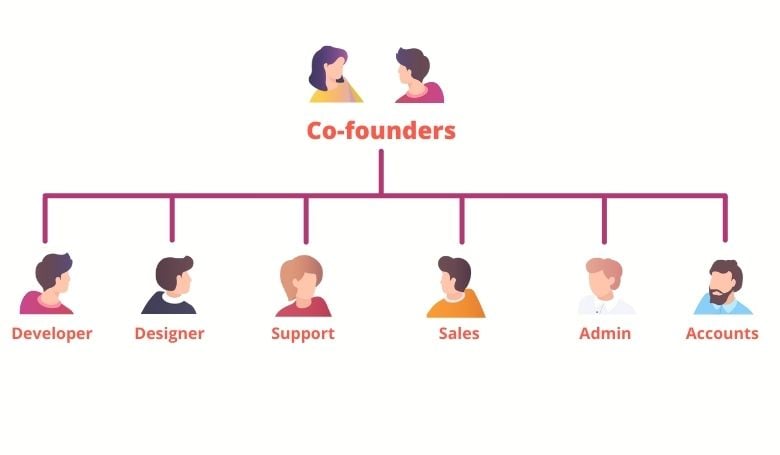 By the time it has built itself up to a major organization on the cusp of an IPO, or as a public company, the structure may look like this: 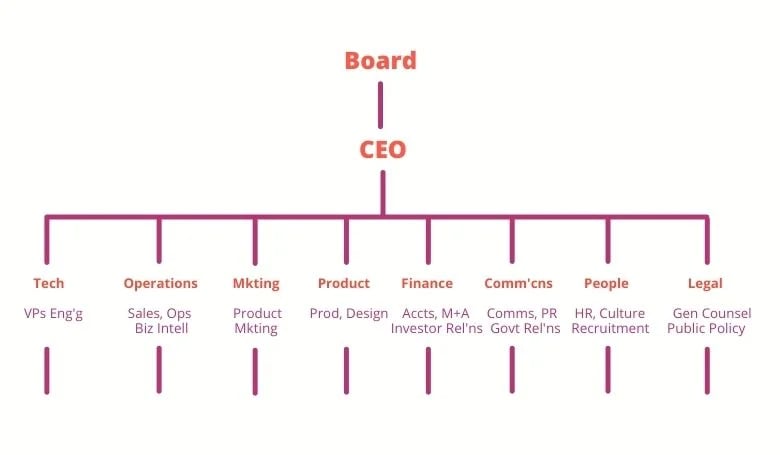 Note: in this example (above diagram) we have not shown the geographical element, which may be layered on top, possibly in a cross-functional or matrix structure.

Advice from Tanvir Bhangoo, in a 2020 Forbes article (2), suggests that to build a great tech company you need to:

: Use Functionly to organize your tech company

Tech companies can grow fast, and in these uncertain times, it can be very easy for outside events to impact on the performance, threats and opportunities of your organization.

Growing fast may sound like fun, but it is also fraught with problems, and tech companies have been known to 'break' once they grow beyond 25 or 30 employees. Structure is imposed, and the wrong structure can stifle productivity and growth.

Using Functionly, you can 'strength test' various scenarios and see how best to structure your growing organization. You can get started for free, so why not trial Functionly, today?